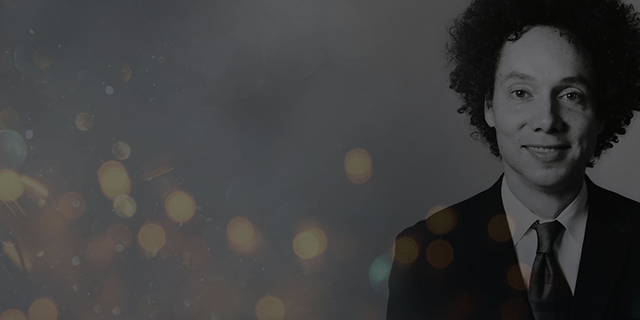 Malcolm Gladwell is the author of six New York Times bestsellers—The Tipping Point, Blink, Outliers, What the Dog Saw, David and Goliath, and Talking to Strangers. He has been named one of the 100 most influential people by TIME magazine and one of the Foreign Policy’s Top Global Thinkers.

Gladwell’s newest book is actually an audiobook titled Miracle and Wonder: Conversations with Paul Simon. Published by Pushkin Industries, Malcolm and co-author, Bruce Headlam, recorded over 30 hours of conversation with Simon. The result is an intimate audio biography of one of America’s most popular songwriters. Brimming with music and conversation, Miracle and Wonder is a window into Simon’s legendary career, what it means to be alive as an artist, and how to create work that endures.

His book, The Bomber Mafia: A Dream, a Temptation, and the Longest Night of the Second World War, was inspired by the four-part series about General Curtis LeMay on his podcast “Revisionist History.” In it, Gladwell weaves together the stories of a Dutch genius and his homemade computer, a band of brothers in central Alabama, a British psychopath, and pyromaniacal chemists at Harvard to examine one of the greatest moral challenges in modern American history.

He has explored how ideas spread in The Tipping Point, decision making in Blink, and the roots of success in Outliers. With his latest book, David and Goliath, he examines our understanding of advantages of disadvantages, arguing that we have underestimated the value of adversity and over-estimated the value of privilege.

Malcolm is the host of a 10-part podcast, Revisionist History. In the weekly podcast, Malcolm re-examines an overlooked or misunderstood aspect of past events.

Malcolm is an extraordinary speaker: always on target, aware of the context and the concerns of the audience, informative and practical, poised, eloquent and warm and funny. He has an unsurpassed ability to be both entertaining and challenging.