More than 43,000 health care professionals have collected more than $3 billion in meaningful use incentive payments, according to CMS. And I was pleased to learn this week during a May 15 meeting at the Office of the National Coordinator for Health Information Technology

(ONC) that family physicians are leading efforts to upgrade medical record technology and are by far the largest recipients of meaningful use funds.

That's not surprising, considering that we are involved with -- and often coordinate -- complex care that requires communication with subspecialists, hospitals and health plans.

Given a few improvements in the regulations -- such as holding electronic health record (EHR) vendors to a standard to ensure interoperability -- even more of us could qualify for meaningful use payments. And that is what we told Farzad Mostashari, M.D., M.S., the national coordinator for health IT (who is pictured with me below) and other ONC staffers during our meeting. 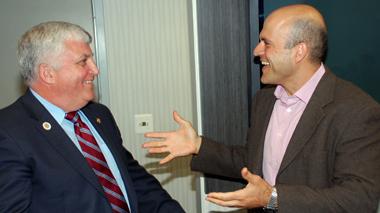 The timing of the meeting could not have been better. ONC and CMS are in the process of reviewing submissions from an open comment period, which ended May 7, regarding proposed stage two meaningful use requirements. The fact that the federal agencies are in the midst of the rule-making process precluded them from talking specifically about meaningful use requirements, meaning it was a listening session for them.

We were happy to do most of the talking.

On May 7, the AAFP sent a letter to CMS asking the agency to show restraint in making changes from stage one to avoid discouraging physicians who are now entering the program. I reinforced the points of that letter during the meeting, including our objections to the following:

The meeting with ONC also coincided with the Family Medicine Congressional Conference, so 17 family physicians were able to attend and provide their own perspectives. Those physicians represented a wide range on the meaningful use spectrum. Some had received meaningful use funds, some were close to qualifying and others were not.

Some physicians spoke about the challenges they faced on the way to achieving meaningful use, while others vented their frustrations about obstacles that have prevented them from doing so. For example, Robert Reneker, M.D., of Wyoming, Mich., talked about competing hospitals in his area that don't share patient information. That factor, which is totally beyond a physician's control, hinders his ability to qualify for meaningful use.

Kevin Wong, M.D., of Jeannette, Pa., also spoke of warring hospitals hampering his ability to qualify and the need for interoperability standards and requirements. And John Bender, M.D., of Fort Collins, Colo., told the ONC staff about his partner, who should have qualified for a full year of meaningful use funds but only received partial credit because of a paperwork processing delay by a Medicare contractor.

We also talked about the burden meaningful use regulations put on small and solo family physician practices, which often lack the resources of larger group practices.

And we talked about the fact that meaningful use requirements shouldn't be just a box waiting for a check mark. They should be factors that actually play a meaningful role in the delivery of care.

Family physicians are leaders in the adoption of EHRs and meaningful use of that technology, according to ONC. If CMS and the ONC truly appreciate family physicians and the importance of primary care, they should ensure that their regulations are fair and reasonable so more of us are able to achieve meaningful use.