Congress of Delegates and Scientific Assembly: A Week to Remember

That was quite a ride.

No, not just the Assembly Celebration, which drew more than 6,000 members and guests to Universal’s Islands of Adventure theme park Sept. 16. I'm talking about the past week as a whole.

Between the Congress of Delegates and Scientific Assembly, the AAFP packed a lot into one sunny week in beautiful Orlando. 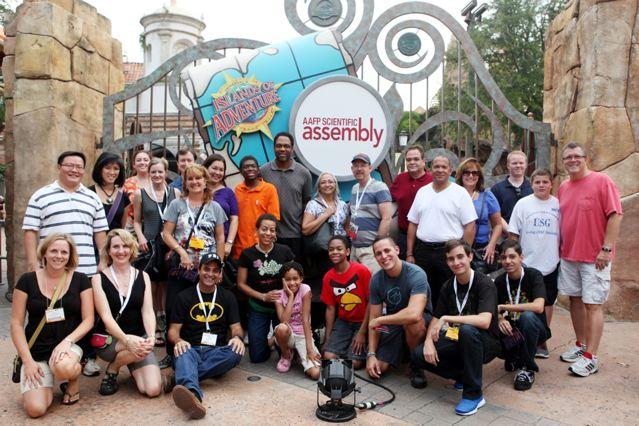 Here are some highlights:

2 -- Number of songs sung by Irish Tenor Ronan Tynan during Opening Ceremony. In between songs, he told his inspiring story of overcoming adversity to accomplish great things.

333 -- That's the staggering number of evidence-based CME activities, designed specifically for family physicians, that was offered during Assembly.

441 -- The number of AAFP members who attended the Congress of Delegates. The Academy's policy-making event also drew 83 non-members.

4,165 -- That is the numbers of physicians who attended Assembly. The event drew more than 10,000 people, including students, other health care professionals and exhibitors. Orlando proved to be a popular destination with participants bringing 3,712 guests. More than 6,000 people -- including the small group pictured above -- turned out for the Islands of Adventure event.

$32,420 -- The amount raised during the week by FamMedPAC. The AAFP’s federal political action committee helps elect candidates to the U.S. Congress who support the Academy’s legislative goals. If you have not yet contributed to FamMedPac, please consider doing so.

$38,041-- The amount raised during the week by the AAFP Foundation(www.aafpfoundation.org). Thank you to all who support the philanthropic arm of the Academy, which promotes humanitarian, educational and scientific initiatives to improve the health of all people.

This week was a great way to start my year as president. I feel re-energized. This is the 20th time I've been to Assembly, and that's always how I feel headed home. This event is a great opportunity to learn so many things and reconnect with colleagues from around the country.

I hope to see you next year in Philadelphia.