The AAFP and other physician groups are working together to keep pressure on lawmakers to repeal the sustainable growth rate (SGR) formula.

It was the first time the nation's four largest medical specialty groups representing physicians who care for Medicare patients converged on Washington with a unified message. It was a powerful statement that these four disparate groups, despite their differences, are united against the broken Medicare payment system. Together, we represent more than 400,000 physicians.

Members of the House and Senate, both Republicans and Democrats, have acknowledged that the SGR does not work. However, there has been no consensus on how to pay for a solution, which after years of temporary patches now carries a $300 billion price tag.

We urged legislators and staff that the SGR must be repealed and emphasized that excess funds assigned to Overseas Contingency Operations -- which support things like the wars in Iraq and Afghanistan -- present an opportunity to pay for a permanent fix.

Our meetings included time with Senate Majority Leader Harry Reid, D-Nev., Senate Minority Leader Mitch McConnell, R-Ky., and House Minority Whip Steny Hoyer, D-Md, who is pictured with me below. We also met with eight members of the House and Senate conference committee, a group of legislators tasked with reconciling differences in House and  Senate bills that would postpone a 27.4 percent Medicare payment cut beyond a March 1 deadline. 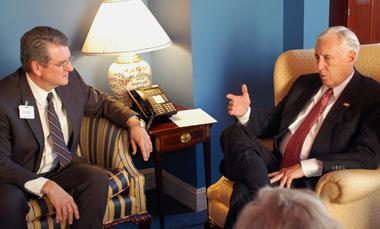 We told lawmakers and staff of our growing frustration with the uncertainty around Medicare and of our willingness to move forward with new payment models. More than 90 percent of AAFP members care for Medicare patients, and we told lawmakers that this instability makes it impossible for us to make long-term plans for our practices.

We also told lawmakers what you have told the Academy about the effect a Medicare payment cut would have on your practices. When we were faced with a potential 25 percent cut a little more than a year ago, nearly 13 percent of members said in an AAFP survey that they would consider closing their doors if the cut took effect. More than 60 percent said they would not take new Medicare patients in that scenario, and more than 70 percent said they would limit the number of appointments given to Medicare patients.

You can help, too. Members of the House are circulating a Dear Colleague letter that will be sent to the conference committee, urging them to repeal the SGR. I urge you to contact your Representative and ask him or her to sign the letter.