Jan. 9 was like any other Thursday. I worked a full, busy and ordinary day as a family medicine resident at my hospital in Huntington, W.Va. Then I drove 30 minutes home to Culloden, W.Va.

It's worth noting that A) Huntington and Culloden are served by two different water treatment plants, and B) I didn't listen to news radio in the car.

On the way home, I stopped to buy groceries for the coming weekend. Although busy grocery stores are nothing unexpected, what I saw on this night was different. It was a new level of frenzy. Still, I didn’t think much of it. Many people in my community had been without power for a few days because of a recent storm. I thought maybe they were restocking their freezers and refrigerators.

I finished my shopping and went to the check-out line. That's when another shopper said to me, "You don't have any water. Why don't you have any water?" 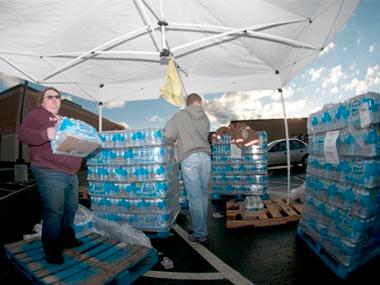 I'm not accustomed to having my shopping cart critiqued, but I was willing to play along.

That is how I found out that an estimated 7,500-gallon spill of 4-methylcyclohexane methanol -- a chemical used to treat coal -- had been detected in the Elk River, less than two miles upstream from our area's water treatment plant.

At that point, I was too late. There was no bottled water left on the shelves in that store or any other store in town. I went home to a weekend without water -- me and 300,000 other people.

A state of emergency was declared for a nine-county area that includes Charleston, the state capital and West Virginia's largest city. We were told not to use tap water for any reason, which meant no consumption, no bathing and no cleaning anything.

Schools and businesses closed. The West Virginia National Guard was activated to distribute drinking water and assist residents affected by a chemical spill. Volunteers, like the Poca High School students in the photo above, handed out cases of bottled water to people in need.

Fortunately for me, my hospital and residency program weren't affected. I was able to shower at the hospital and fill water bottles to take home. My fellow residents were wonderful, watching my 6-year-old during his unplanned vacation while I was on call, and they also allowed my husband and son to shower or bathe at their homes.

In the bigger picture, it was fortunate for others in the area that the hospital was unaffected because without water, other health care facilities in the nine-county area were unable to care for their patients.

To transfer patients from one facility to another, you have to have an accepting physician on the receiving end. Although other academic and private admitting services at my hospital declined to accept transfers from the affected facilities in Charleston, our family medicine service did. If we hadn't taken these patients, they would have been sent to facilities in Ohio or Kentucky, and we didn't want that to happen to them.

And although I feel good about the care we were able to give, we were quickly overwhelmed. In addition to patients transferred from other hospitals (after being admitted for reasons unrelated to the spill) we also treated numerous patients who were exposed to the tainted water and were suffering with nausea, rash, headache, diarrhea and vomiting.

We also experienced a surge in patients suffering from influenza. Without access to water, people couldn't wash their hands, and the flu spread rapidly within a few days.

Soon, our hospital was full. People were admitted with no bed to go to, so gurneys were set up in the hallways with makeshift bed numbers taped to the walls.

People pitched in and helped out because in a crisis situation you have to adapt and be flexible. Residents who weren't on call offered to help. We stepped up and took care of patients who needed help.

Finally, on Jan. 15, patients from Charleston started going back to the facilities they came from.

This past weekend, people in my community were allowed to flush their pipes -- running faucets and showers, dishwasher and washing machines -- to clear the tainted water from the system. The process made the house smell, and the stuff coming out of the pipes was awful. But it's progress and a step closer to getting back to normal.

Would you be ready if a crisis affected your community? The AAFP has resources available to help families, medical practices and communities prepare for disasters.

Kimberly Becher, M.D., is the resident member of the AAFP Board of Directors.