During my six years on the AAFP Board of Directors, I've testified before Congressional committees, lobbied in Capitol Hill offices and been to the White House. But I'd never been to a national political convention until this week, and I wasn't sure what to expect.

What I've found during the Democratic National Convention is that AAFP representatives -- Mark Cribben, director of FamMedPAC, the Academy’s political action committee; David Carlyle, M.D., a member of the FamMedPAC board of directors; and myself -- have enjoyed excellent access to legislators here in Charlotte, N.C.

On Tuesday alone, we meet with more than half a dozen members of Congress, including Senate Majority Whip Dick Durbin of Illinois. Durbin (pictured with me below) was one of the speakers at a morning function along with Sen. Patty Murray of Washington and former Virginia governor and current Senate candidate Tim Kaine. 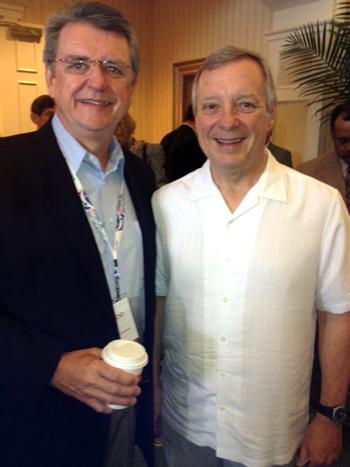 We made our way through a series of afternoon receptions, meeting with Rep. James Clyburn of South Carolina, Rep. Eliot Engle of New York, Rep. Frank Pallone of New Jersey, Rep. Nancy Pelosi of California, Sen. Sherrod Brown of Ohio and Sen. Dan Inouye of Hawaii along the way.

On Wednesday night, the Academy co-sponsored a lounge for members of Congress and staff before the convention. We had a good turn out with several legislators stopping to spend time with us, including Rep. Allyson Schwartz of Pennsylvania, Rep. Jan Schakowsky of Illinois and Rep. Gene Green of Texas.

Wherever I've been this week, and regardless of whom we are talking to, people have recognized the AAFP. Legislators know that we are a player in our nation's ongoing dialogue about health care, and the reception has been incredible.

These aren't just handshakes in a receiving line. Brown spoke to me for at least 20 minutes about our issues -- physician payment, work force and medical liability reform. When I ran into him again later Tuesday evening, he thanked me for my time.

This isn't a partisan effort, either. Last week, the AAFP sent representatives to the Republican National Convention in Tampa, Fla. Many of the legislators we've met during these two weeks are people we have spoken with in the past. In fact, most of the lawmakers I have talked to here I have previously visited with in their Washington offices. Being here, however, reinforces those contacts and shows them our commitment to our specialty and our patients.

We will follow up with members of Congress after they return to work later this month, reiterating our message that the key to fixing the health care system is investing in and strengthening primary care.