It should have been easy, but it wasn't.

On Friday afternoon, I was sitting with my parents, who had driven 100 miles to watch me perform the simple, mundane task of opening an envelope. This, of course, was no ordinary piece of mail. The letter inside was the culmination of eight years of hard work and a lifetime of dreams.

This was The Match. 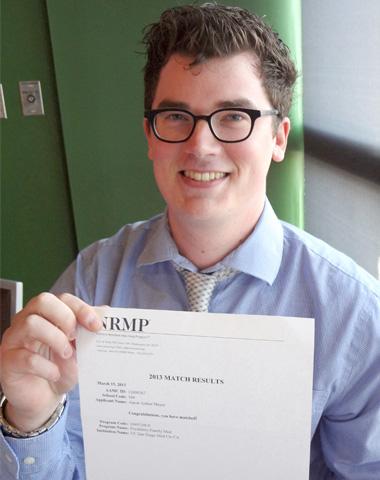 It took me less than 10 seconds to open that envelope, but it seemed much longer. I knew what I wanted, and I felt confident that I would get the result I had hoped for. But until you pull out that letter, there is uncertainty.

Where was I going? There were plenty of choices.

Last fall, I completed four-week rotations at clinics in Pennsylvania and California and interviewed at a dozen other residency programs in between (as well as another in Alaska).

The letter in the envelope held the answer and would influence my life and career for years to come. The entire day had been one big swell of emotion. I was exhausted, and it was only 2 p.m. when it was over.

I have wanted to be a doctor for as long as I can remember. It's not surprising considering the amount of time I spent around physicians during my childhood. I was born with a heart defect and had open heart surgery when I was 2. That led to annual visits with a cardiologist. I also was fortunate to have a great pediatrician.

So when I headed to Saint Louis University as a college freshman, I already knew I would become a doctor. The question was what kind.

The answer -- family medicine -- came during the year I spent working at the Nativity House, a homeless shelter in Tacoma, Wash. I also developed an interest in psychiatry while working at the U.S. Department of Veterans Affairs during my third year in medical school.

When it was time to look for a residency, my goal was to match into a program that combined family medicine and psychiatry. I found it in November during my rotation at St. Vincent de Paul's Family Health Center, a medical clinic in a homeless shelter that is affiliated with the University of California, San Diego.

It is a challenging, five-year program. And there were only two spots available. By the time Match Day rolled around, San Diego was my first choice.

When I opened my envelope and saw San Diego on the letter inside, it was a huge relief. This is the program that gives me the best opportunity to be the person and physician I hope to become.

I have less than two months of medical school left. I have a three-week rotation in rural family medicine in Illinois and then a two-week primary care course before my residency program starts in San Diego.

I'm excited for the transition. It is thrilling and terrifying at the same time.

Aaron Meyer is the student member of the AAFP Board of Directors.