Medicare Payment Key Issue in Latest Round of Meetings with Congress, CMS

For the second time in three weeks, AAFP leaders were in Washington Feb. 13-15 to meet with members of Congress, key congressional staff members, the head of CMS and AMA representatives about issues critical to family medicine, including the sustainable growth rate (SGR) formula.

During those meetings, Board Chair Roland Goertz, M.D., M.B.A.; President-elect Jeffrey Cain, M.D.; EVP Douglas Henley, M.D.; and I urged legislators (including Rep. Michael Burgess, R-Texas, in the photo below) to not only avert a 27.4 percent Medicare payment cut scheduled to take effect March 1 but to repeal the SGR once and for all.

Although there is bipartisan support for fixing the broken Medicare payment system in both the House and the Senate, lawmakers cannot agree on how to pay for the now-$316 billion fiasco. As we made the rounds on Capitol Hill, we learned an agreement on a 10-month SGR extension was in the works. The temporary patch, which the House and Senate approved today, will maintain Medicare payments at 2011 levels through the end of this year.

Despite some sense of relief at the prospect of preventing the 27.4 percent payment cut, we obviously were frustrated and disappointed that Congress once again would be failing Medicare patients and the physicians who care for those patients -- and we let that disappointment be known during our meetings in Washington. 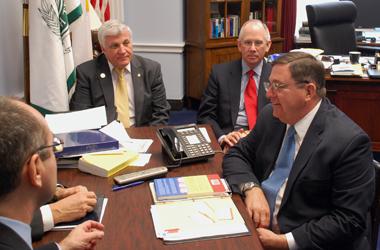 A 10-month patch is sufficient time to develop a plan to repeal the SGR, but will Congress even use this period to begin work on preventing the next cut -- a whopping 32 percent -- which is scheduled to take place Jan. 1, 2013? Will lawmakers even try for a long-term solution, or will they again settle for another short-term patch while the payoff amount continues to escalate? The cost of a permanent fix skyrockets to $335 billion in 2013 and to more than $600 billion in 2016.

AAFP leaders will continue to push Congress for a permanent fix and a meaningful payment differential for primary care physicians. You can help by attending the May 14-15 Family Medicine Congressional Conference, where AAFP members will be trained in lobbying lawmakers about our issues before heading to Capitol Hill to visit with legislators. With more than 100 family physicians typically taking part in this event, we will be on the Hill in force, and the SGR will be one of the key issues we'll be discussing with legislators. Please consider joining in this important effort.

The SGR, however, is not the only payment issue we tackled this week in Washington. In addition to meeting with legislators and congressional staff, AAFP leaders met with representatives from the AMA and, separately, with CMS Acting Administrator Marilyn Tavenner, B.S.N., M.H.A., about the AMA/Specialty Society Relative Value Scale Update Committee (RUC) and the AAFP Primary Care Valuation Task Force.

The RUC is the expert panel that makes recommendations to CMS on the relative values of CPT codes. Only five of the committee's 29 members represent primary care, which has contributed to an undervaluation of primary care services. Last year, we asked the RUC to address this bias, including a request to add more seats for primary care.

The AAFP Board of Directors is expected to discuss the RUC's response to our letter when it meets March 7-10.

At that same meeting, the Board is expected to hear the recommendations of the valuation task force, which was formed in July to address inadequate payment for primary care services. CMS has had an observer at the task force's meetings, and Ms. Tavenner told us she is interested in hearing the group's recommendations and will give them thorough consideration. CMS is beginning work on its proposed rule for the 2013 Medicare Physician Fee Schedule, and our recommendations will be timely and relevant to that document.

With the RUC's response to our letter and the task force's report on the agenda -- among other things -- our March Board meeting promises to be an interesting one. As always, I will keep you informed.