The Path That Brought Me Here

We all have had classmates and colleagues who knew from an early age that they were going into medicine, but I was not one of those students. I never wanted to be a physician when I was growing up.

In fact, I was fairly convinced that I wanted nothing to do with physicians during one college break that I spent working as a ward clerk at Grady Hospital in downtown Atlanta. I was incredibly impressed with the dedicated staff I worked with there, however. I saw early on that the true care of patients required a team, including folks who often went unrecognized by physicians and patients alike.

I enjoyed the incredible and diverse educational experiences of Haverford College in Haverford, Pa. I got a wonderful education in science tempered by broad liberal arts training obtained in a collegial setting. But halfway through my junior year, I realized that a degree in molecular biology limited me somewhat. And I did not really want to do research. Reconsidering the time I spent at Grady, I decided that perhaps medical school was a good opportunity after all. 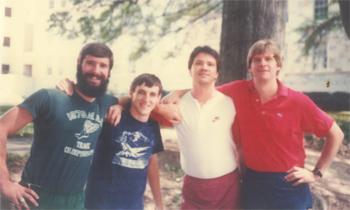 I went home to attend Emory School of Medicine in Atlanta. I was there at a time when the school did not have a family medicine department, so my first exposure to family medicine did not come until my second year when I was fortunate to receive an opportunity to shadow Andy Morley, M.D., a dynamic family physician in Decatur, Ga.

The first day I spent with him, he did a vasectomy in his office, did a well-child visit, and saw people of all ages for acute and chronic problems. I also got to know his staff "family," who became my friends for years. That afternoon we made hospital rounds, which included more procedures and treating a woman who was having a heart attack. We finished the day by swinging by a nursing home to see one special patient and her family.

I was incredibly impressed and excited to experience first-hand the power of my early clinical mentor. I remembered this important time during my third year when I had difficulty choosing among the different specialties. I was one of only two graduates in my class at Emory that went into our amazing specialty.

I was blessed to go on to the Medical College of Georgia (MCG) for residency training and to work with such amazing physicians as Joseph Hobbs, M.D., and Joe Tollison, M.D. But it wasn't until my year as chief resident that I was first exposed to the leadership opportunities of the AAFP. As a chief resident, I was able to go to the National Conference of Family Medicine Residents and Medical Students in Kansas City, Mo. When I asked what it was about, I was told, "Just go and enjoy it."

Of course, I went to Kansas City and got the bug! I came home incredibly excited about the opportunities I had seen. In fact, I stayed at MCG to do a fellowship year and, therefore, was able to run and be elected as one of the resident delegates to the Congress of Delegates along with future leaders such as Anne Montgomery, M.D.

I came back to Georgia and got involved in my state academy. During that time, Andy Morley, my original mentor, was actively serving on the AAFP Board of Directors and ran for president-elect. In retrospect, he actually opened almost every door for me into the broad opportunities of family medicine.

When I moved to Tennessee in 1992, I was fortunate to join a dynamic state chapter that was open for the new kid on the block to become involved. My journey led me here today.

It is hard to believe that my year as president-elect is over, and I am starting a new one as your president. I am extremely excited about this opportunity. Family physicians are poised to be recognized for all of the work we have done and are ready to do for the health care of Americans.

Thank you for giving me this once-in-a-lifetime chance to lead our Academy. I look forward to representing you as your voice during the next year.

During the Congress of Delegates, I am reminded that anyone attending an AAFP meeting for the first time easily could become active on the Board and be elected an officer. Similarly, you could come to just one of these meetings, have an idea, bring it forward for discussion and end up with a resolution that then becomes not only Academy policy but likely a message taken to our representatives in Washington.

We don't know who will be the leaders of medicine in the future. In the photo above, the classmate standing next to me, Christian Larsen, M.D., was named the dean of our alma mater, Emory University School of Medicine, earlier this year. Who could have guessed when that photo was taken in the 1980s that either of us would be where we are today?

Each and every one of us makes a difference every day in the lives of our patients and our communities. We all wear many different hats, and I invite you to try a few new ones on for size. Join me in changing the world for the better. Get active in your state chapter. Come to our Annual Leadership Forum, National Conference of Special Constituencies or the National Conference of Family Medicine Residents and Medical Students.

Together, let's get involved, stay involved and make a difference.

Reid Blackwelder, M.D., is the President of the AAFP.

Subscribe to receive e-mail notifications when the blog is updated.

Our Other AAFP News Blogs