I had never met Col. Michael Place, M.D., when I recently installed him as the Uniformed Services AFP president. Technically, I still haven't.

I attended the USAFP (www.usafp.org)(www.usafp.org)annual meeting March 18-23 in Las Vegas, but Mike couldn't make it -- at least not in person. Thanks to the Internet and Skype, the roughly 600 USAFP members in attendance did get to see their chapter president take his oath, as you can see in the photo below. (I'm the tiny figure in the bottom left corner.)

While we were in a comfortable hotel on the Las Vegas strip, Mike -- commander of a U.S. Army combat support hospital and medical task force -- was more than 7,000 miles away in a tent in Afghanistan. 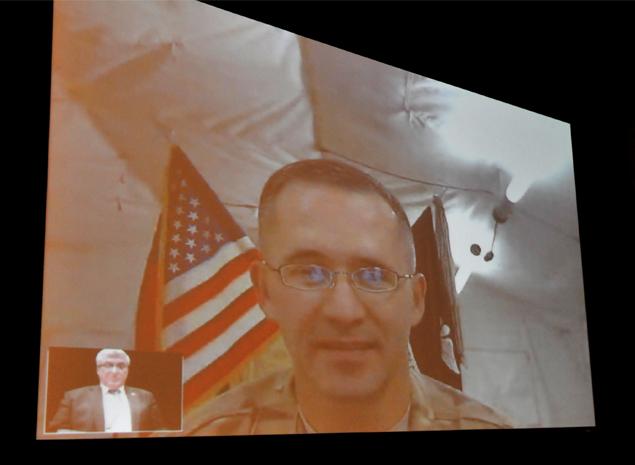 I've installed 16 chapter presidents during my years on the AAFP Board of Directors, and I've heard some pretty good speeches. But nothing compares to that inspiring day.

During the ceremony, there was a laptop with a webcam on the podium so I could see Mike, and he could see me. Chapter members watched him on a big screen. As we finished the installation, I turned the laptop/webcam to the crowd so Mike could see the people clapping and cheering for him.

It was a tremendous sight. Mike was beaming.

Mike has been in Afghanistan for more than five months. Given the time difference and bandwidth limitations, most of his correspondence is by e-mail. He will get plenty of help from his vice president during his deployment, just as he covered for a previous president during a deployment. Mike thought it was important that he be formally sworn in as president, even though he is overseas, because deployments are a real possibility for nearly all of the chapter's members. It was important to him and the chapter to recognize and celebrate the important role that family physicians play in the Uniformed Services during a time of conflict.

USAFP members serve in small unit aid stations and in a variety of leadership positions up to and including command of a deployed hospital. They prevent illness and injury in addition to treating those who are injured, ill or wounded in combat. Mike is proud -- and rightly so -- to be one of them.

I have great respect and admiration for these men and women and the work they do, and I felt blessed to be with them.

You can read more about the USAFP in AAFP News Now's latest chapter spotlight story.